Traders on Wall Street and many investors are in a good mood. Stocks soared Wednesday after Federal Reserve Chairman Jerome Powell said rate hikes could ease this month. With this recent rise, the Dow is more than 20% above its 52-week low, which puts it in a new bull market.

Here’s what else you need to know to Get Up to Speed and On with Your Day.

(You can get “5 Things You Need to Know Today” delivered to your inbox daily. Sign up here.)

The US is considering a dramatic expansion in the training it provides to Ukrainian forces, including instructing as many as 2,500 Ukrainian soldiers a month at a US military base in Germany, according to multiple US officials. Since the start of the conflict in February, the US has trained only a few thousand Ukrainian soldiers on specific weapons systems. But to combat Russia’s ongoing aggression, officials say that a new regimen with “much more intense and comprehensive” training would benefit Ukraine as the onset of winter is expected to slow military operations. Separately, Russia’s new expanded law on “foreign agents” comes into force today amid an intensifying crackdown on free speech and opposition under President Vladimir Putin.

The Biden administration was dealt another setback in court Wednesday that will further complicate the revival of its student loan forgiveness plan. A second federal appeals court rejected the administration’s bid to put on hold a ruling blocking President Biden’s student debt relief policy. The move sets the stage for the Justice Department to take the case to the Supreme Court, which is already considering a separate request from the administration that it reverse another order blocking the program. Nearly two weeks ago, the Department of Education began emailing borrowers who have been approved for federal student loan relief – but acknowledged recent legal challenges have halted the plan from moving forward.

The House Ways and Means Committee has received six years of Donald Trump’s federal tax returns from the IRS, ending a yearslong pursuit by Democrats to dig into the former president’s financial records. The handover had been on hold until the Supreme Court declined last week to intervene. Federal courts had decided the House could request Trump’s returns – primarily from the time he served as president. Trump’s legal team had continuously sought to keep his returns secret. During his 2016 campaign, Trump broke with presidential election norms and refused to release his tax returns for public review and they remained private after he took office. The House committee is expected to meet today but Democrats are not expected to review the tax returns during this session – and the documents are not expected to be immediately released to the public.

Between 9,000 and 14,000 migrants may attempt to cross the US southern border each day when the border policy known as Title 42 ends in three weeks, the Department of Homeland Security projects. That would be more than double the current number of people crossing. Since March 2020, border authorities have been able to turn away migrants encountered along the border under Title 42. However, that will no longer be the case later this month when authorities return to traditional protocols under which migrants are either removed from the country, detained or released into the US while their cases make their way through immigration court.

Survivors of the mass shooting at Robb Elementary School in Uvalde, Texas, have filed a $27 billion class action lawsuit against multiple law enforcement agencies in Texas. The plaintiffs include parents, teachers and school staff members who were at the school on May 24 when 19 students and two teachers were killed. At least 17 others were wounded. Officers waited 77 minutes after the shooter entered two adjoining classrooms before storming in and killing the 18-year-old gunman. According to the lawsuit, despite active shooter training, law enforcement “fundamentally strayed from conducting themselves in conformity with what they knew to be the well-established protocols and standards for responding to an active shooter.” The suit also alleges the victims and survivors “sustained emotional and psychological damages.”

The royals have arrived! See photos of the Prince and Princess of Wales sitting courtside at the Boston Celtics vs. Miami Heat game.

If you want to live in one of these desirable cities, you might spend extra on housing, gas, and food. Prime example: $20 avocado toast in Los Angeles…

Taylor Swift snagged second place on the streaming list behind this global icon. Don’t worry Taylor, you’re still first in many of our hearts.

The luxury automaker says this new $300,000 vehicle is meant to be driven on dirt roads – and will be its last purely gasoline-powered supercar.

Christine McVie, the singer-songwriter behind some of Fleetwood Mac’s biggest hits, died Wednesday following a brief illness, according to a statement posted by her family. She was 79. McVie wrote and/or sang several of their hits including “Don’t Stop,” “Over My Head,” “You Make Loving Fun” and “Say You Love Me.”

That’s about how many people in the US are living with HIV – and about 13% of them don’t know it, according to HIV.gov and the Department of Health and Human Services. Today is World AIDS Day, and while researchers and advocates have focused on HIV for decades, it remains a major global health problem. For more, CNN Impact Your World spoke with two high-profile AIDS activists about ways we all can play a role in preventing these types of infections.

“We are sending a clear message that the Virgin Islands will not serve as a haven for human trafficking.”

– US Virgin Islands Attorney General Denise George, on reaching a $105 million settlement Wednesday with the estate of Jeffrey Epstein. George had previously sued the Epstein estate for allegedly using a system of private planes, helicopters, boats and vehicles to bring young women and girls to his island residence on Little St. James. There, the victims were “deceptively subjected to sexual servitude, forced to engage in sexual acts and coerced into commercial sexual activity and forced labor,” the lawsuit said. The settlement ends Epstein’s estate’s ownership of properties in the US Virgin Islands.

New storm system brings rain and snow to the West 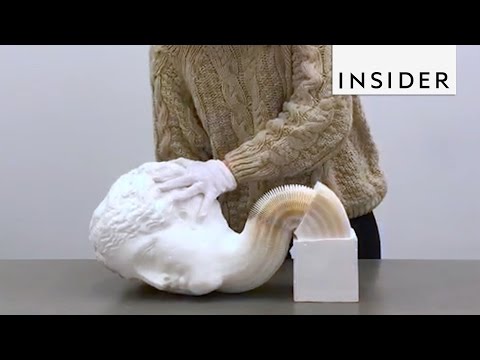 These sculptures can stretch

See how an artist creates stunning sculptures that can morph in many ways. (Click here to view)