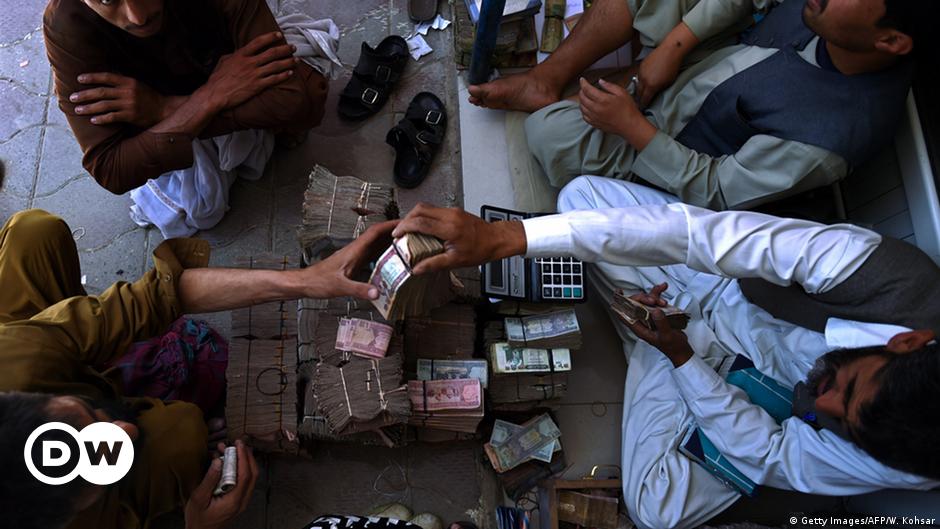 The speed of the Taliban’s capture of Afghanistan last weekend has left the West scrambling to curtail the Islamist militants’ grip on the country. Military action has been all but ruled out and instead the United States and its NATO allies have turned to financial warfare.

US President Joe Biden and the Federal Reserve have frozen billions of dollars in Afghan currency reserves held in the US. Nearly $9 billion (€7.7 billion) in assets are kept in the US and other countries, including $1.2 billion in gold and more than $300 million in international currencies.

In anticipation of the fall of Kabul, Biden last week halted shipments of US dollars to Afghanistan — a move the country’s former central bank chief Ajmal Ahmady said would lead to “dire” prospects for the people.

US financial newspaper The Wall Street Journal reported that Washington is also blocking Taliban access to government accounts managed by the Federal Reserve and other US banks.

Ahmady wrote on Twitter that the country was “reliant on obtaining physical shipments of cash every few weeks,” due to a large currency account deficit. “The amount of such cash remaining is close to zero,” he warned.

The International Monetary Fund (IMF) has suspended around $340 million foreign exchange reserve assets that the Taliban could turn into hard currency citing a “lack of clarity within the international community regarding recognition of a new government.”

Any Afghan bank reserves the militants can acquire will be insufficient to run the country, raising the prospect that one of the world’s poorest nations is set to fare much worse.

Hans-Jakob Schindler, a former coordinator for a United Nations team that monitored the Taliban and other extremist groups, told DW that the reserves are not enough to “run the country in a sustainable manner.”

“There’s not much cash, if you think on a national scale,” he said.

No more poppy cultivation? The Taliban have made a mint from opium and heroin production

Having long faced international sanctions as a terrorist organization, the Taliban’s insurgency was fueled by the huge Afghan poppy trade, drug trafficking and extortion.

Afghanistan is the largest exporter of opium in the world and the latest UN report put annual funding from the source for the Taliban anywhere from $300 million to $1.6 billion.

The country’s new rulers have vowed to put an end to the narcotics trade, a promise that has been viewed with much skepticism, especially in light of the financial reprisals from the West.

“I very much doubt that they want to eradicate drug production in Afghanistan and their ability to do so,” Schindler said, adding: “The commanders on the ground basically have no other income.”

But the Taliban will clearly require international legitimacy to rule effectively. The freeze on assets and development aid could help pressure them to agree on a power-sharing government acceptable to the West.

Any bank reserves seized by the militants during their recent offensive are unlikely to amount to much, Schindler warned, making new sources of revenue critical.

“We can say the accessible funds to the Taliban are perhaps 0.1-0.2% of Afghanistan’s total international reserves. Not much,” Ahmady, who left the country on Sunday, wrote on Twitter.

Afghanistan is estimated to have between $1 trillion and $3 trillion worth of minerals, including copper and lithium needed to power the global energy transition. Much of it remains untapped due to endemic corruption and woeful infrastructure.

Some analysts are skeptical about the Taliban’s willingness or competence to exploit those natural resources, despite several recent mining deals with China under the previous government.

Afghanistan’s currency has tumbled to record lows this week

“The Taliban do not intend to rebuild the Afghan economy and will likely put an end to foreign business deals in the country,” Tilman Brück, Founder and Director of the International Security & Development Center (ISDC) in Berlin, told DW. “By their nature and ideology, the Taliban are not interested in economic growth.”

While China already has a footprint in the country, Western investors will likely shy away from involvement with a group that openly rejects liberal values to the extent the Taliban does, Brück believes.

“The scope of private sector-led investment was always very limited and is even more limited with the absence of western military powers on the ground,” he said.

Ahmady predicted that Afghanistan’s new rulers will have to introduce currency controls — limiting access to dollars immediately — and said that inflation would rise as the local currency continues to drop, hurting the poorest the most.