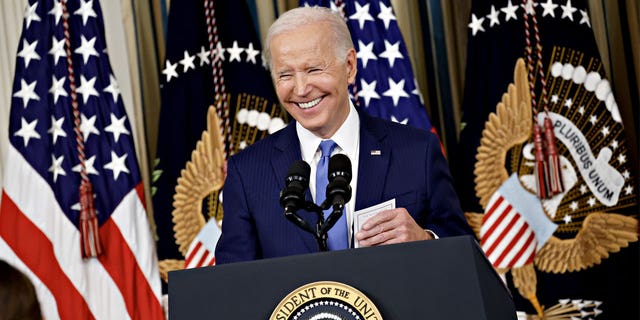 Legal challenges to President Biden’s massive student loan handout are likely to head to the Supreme Court, which will take down the administration’s unconstitutional plan, experts tell Fox News Digital.

Biden’s plan, which aims to cancel up to $20,000 in student loan debt for Pell Grant recipients in college and up to $10,000 for others who borrowed using federal student loans, is set to cost taxpayers over $400 billion. Since the administration’s announcement, a handful of legal challenges have been filed in courts across the nation, as states and advocacy groups work to halt Biden’s plan.

Carrie Severino, president of the Judicial Crisis Network, told Fox News Digital that challenges to the president’s student loan handout is a case the Supreme Court “ought” to take up.

Since the administration’s announcement, a handful of legal challenges have been filed in courts across the nation as states and advocacy groups work to halt President Biden’s plan.
(Ting Shen/Bloomberg via Getty Images)

“This is a classic area that the court has been looking at a lot lately, in part because we have seen administrations like the Biden administration that are reaching beyond their authority,” Severino said.

“So the way that this is being done is exactly the type of behavior that the court has had to smack down on several occasions,” she continued, citing the eviction moratorium and nationwide COVID-19 vaccine mandates as examples where the Supreme Court intervened and struck down administration policies. “The student loan forgiveness is the same kind of thing.”

“By the president’s own admission, the COVID crisis is over. And yet now we’re suddenly declaring a state of emergency to achieve one of his goals, which is simply a policy goal,” she said, noting that in order to constitutionally achieve his goal he would have to go through Congress. “He knows he doesn’t have the support of the legislature. So it’s just ‘whatever I can do to get around that.’ And the court has been our backstop, or constitutional policing of those boundaries. And so I think that’s hopefully something the court will step into to police here as well.”

Missouri led Arkansas, Iowa, Kansas, Nebraska and South Carolina in filing a lawsuit to challenge the program, claiming that the Department of Education lacks the authority to cancel debt to this degree.

O.H. Skinner, executive director of the Alliance for Consumers, told Fox News Digital that he believes the case led by Missouri has the strongest chance of knocking down Biden’s plan.

“I think that this is the only ticket in my mind. I don’t think there is another viable to take down the student loan bailout provision. And I think they have a really strong argument, and their argument is strong enough to take it to the Supreme Court. And I think if the Supreme Court takes it, then it’s going to go down in flames,” Skinner said.

“And so I think this is an example where without the states pushing, I don’t think this happens. But because you have strong, principled, conservative state [attorneys general] pushing for the rule of law, you’re going to see a big win for the rule of law here at some point in the next 18 months,” Skinner continued.

A federal judge in Texas struck down President Biden’s student loan handout in a Thursday night ruling in a case brought by the Job Creators Network Foundation. The suit, filed in the U.S. District Court for the Northern District of Texas, argues that the plaintiffs were denied due process under the Administrative Procedure Act to object to the move during a comment period.

“Whether the Program constitutes good public policy is not the role of this Court to determine. Still, no one can plausibly deny that it is either one of the largest delegations of legislative power to the executive branch, or one of the largest exercises of legislative power without congressional authority in the history of the
United States,” United States District Judge Mark Pittman wrote Thursday.

The Department of Justice said Friday that it will appeal the decision.

Kelly Laco is a politics editor for Fox News Digital.