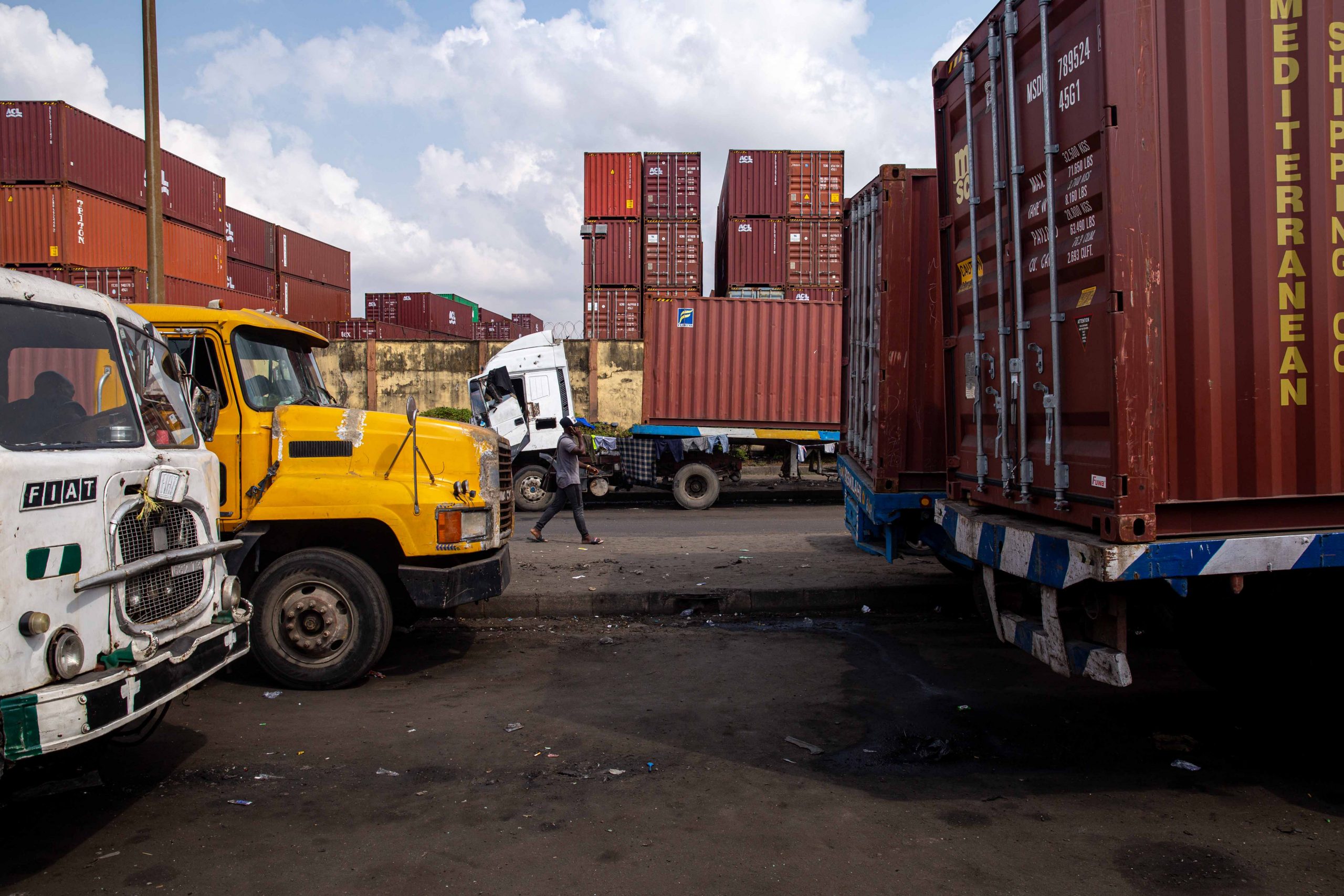 Trucks parked on the road side waiting to get access into Tincan port in Apapa, Lagos. (Photo by Benson Ibeabuchi / AFP)

• Insurers groan under huge claims obligation
Beyond additional costs incurred by Nigerian importers and exporters due to safety concerns in the Gulf of Guinea (GoG), operational and infrastructural challenges at the nation’s ports and access roads have continued to push insurance firms underwriting cargoes to the edge.

These have made them adjust clauses, and in many cases, spike the cost of cargo insurance by the average number of days delays occur.

The sum insured for specific transit policy is calculated considering the invoice value, freight cost and the incidental expense.

For instance, shippers deposit N150,000 to N200,000 for insurance on containers for moving their goods from the port, while an average number of 60 days is calculated in insurance premiums for delays for cargo transiting to the ports.

All of these costs have implications on the cost of goods, especially at a time inflation remains high and disposable incomes very weak.

Similarly, the persistent difficulty in accessing the nation’s major seaport, Apapa, is taking its toll on movement of non-oil exports and affecting foreign earnings, with earlier studies by the organised private sector putting the loss at $10 billion yearly.

While standard marine cargo and contingent business interruption in insurance policies require physical loss or damage to trigger coverage, any losses companies incur when shipments are late are not insurable. This is categorised under moral hazard in some underwriting firms. The scenario has made it only somewhat more favourable for machinery/equipment import/export, while non-oil export continues to suffer.

Already, firms underwriting cargo businesses in the country noted that they are currently overwhelmed by avoidable claims, resulting from damages of goods meant for export and risks associated with handling.

With general merchandise and perishable goods, there usually aren’t any cost-effective opportunities for either minimising potential losses or transferring the risks via insurance. The reasons are that the companies on both ends of a transaction have virtually no control over how products travel from origin to destination.

Once a shipment is consigned to a broker or freight-forwarder, the cargo owner isn’t involved in determining the ship(s) that carries it or the route the ship takes, including any intermediate stops made along the way.

The Guardian learnt that some factors such as poor access roads to ports and multiple checks by government agencies cause delay in delivery and thereby lead to damages of perishable goods; while fake documentation of insurance papers also pose danger to operations of genuine insurance firms.

Insurance firms confirmed to The Guardian that such situations have led to increased claims and huge premium arrangements involving billions of naira on a monthly basis.

Operators said they have been confronted with more huge claims obligation to owners of goods because the consignments were not cleared from the port early enough.

According to them, claims arising from theft of goods at the port by “port rats” and some dangers to the goods while at the storage location waiting clearing might be avoidable if the 24-hour clearing window is implemented.

“In other parts of the world like the United States (U.S.) and Europe, it takes between three to five days to clear goods from the seaport whereas, in Nigeria, the case is different, if care is not taken consignment may still be in the port after two months and this unduly exposes insurance cargos to more hazard while in storage,” a source said.

An importer, based in the United States, who is the Chairman, CCP International Shipping Company, Adeyemi Adegboyega, told The Guardian that the Nigerian government needs to streamline the number of agencies checking cargos in the port because they contribute to the damage of goods, as they delay in checking, cargoes take longer weeks and regulators also use the avenue to exploit importers and exporters to enrich their pockets.

Adegboyega urged the government to give incentive to citizens so that more people will come into the business, while more revenue would be generated to boost economic prosperity of the country.

Checks by The Guardian revealed that Ghana Revenue Authority (GRA) had reported growth in import revenue of 3.9 per cent as a result of its new paperless port clearing system.

Data from the authority’s customs division in Ghana shows that import revenue increased from C12.7bn in 2017 to C13.2bn in 2018.

It means the import process flow is now done via an online system, which captures all relevant import information on a database. Traders can obtain required import licences, permits, and certificates before the arrival of goods as well as pay fees and charges, among other things. It also involves a risk clearance system that determines the selectivity of transactions, granting automatic customs release without scanning or physical examination.

The Guardian reliably gathered that the new system has allowed shippers in Ghana to clear their goods in a matter of four hours, down from what used to take a week or more.

The Managing Director, Law Union & Rock Insurance Plc, Adeduro Ademayowa, who spoke to The Guardian, called on government to cancel multiple checks in both airports and seaports across the country, saying the development would give relief to the inflow of cargos through the airports, which hitherto, were subjected to multiple checks and levies by different agencies of government.

“Doing cargo business, through Nigeria’s airports, has often been a nightmare compared with airports in other climes, where goods screening is performed largely at just one point. Governments should therefore hasten to extend the cancellation to all other checkpoints at ports in the country to enhance smooth passage and give Nigeria a better image,” he said.

The operators said if the government could put in place measures that would provide ease of doing business for the underwriting companies, they will realise more revenue from cargoes, and this would boost activities in the insurance industry and contribute immensely to the nation’s Gross Domestic Product (GDP).

The Team Lead Manager, AllCO Insurance Plc, Shadrach Adegoke, said the agency saddled with the responsibility of checking insurance documents of importers in Nigeria is the Nigeria Customs Services.

“This comes as part of their role as the agency appointed by the Federal Government to carry out destination inspection for all goods imported to Nigeria. In the same vein, the integration of the marine NIID into the CBN Single Window Trade Portal has made insurance certificate verification easier for NCS and the CBN. This is because before a prospective importer can generate form “M” for an import transaction, he is expected to, among other things, input the marine certificate number into the trade portal application.

“Meanwhile, the system has been designed in such a way as to run the number provided through the marine NIID database to validate the authenticity or otherwise of the certificate. If the certificate is returned and not found on the system, the importer would not be able to continue with the form “M” application until the problem is rectified.

“This requirement has engendered greater collaboration between insurance companies and the various government agencies with a view to reducing if not completely, eliminating the peddling of fake marine insurance certificates to unsuspecting importers,” she said.

According to her, Section 67 of the Insurance Act 2003 makes it compulsory for all insurance of import into Nigeria to be done with an insurance company registered under the act. This law made the insurance of imports compulsory, but the impact of the law was not felt because there was no enforcement on one hand and the market was flooded with fake marine certificates by peddlers on the other hand.

However, she said the growth can be attributable to the following reasons, importers are becoming more and more aware of their risk exposures and their attendant impact on their business in the case of any eventuality.

She said the insurance companies have intensified awareness on the importance of insurance through various avenues such as the print, electronic and social media; and the development of the marine NIID and the subsequent integration into the CBN Trade Porter is a major game-changer in eliminating fake insurance from the market.

The Head, Underwriting Business, FBN General Insurance Limited, Ndubuisi Alu, said pirates attack is another major problem, saying insecurity around Nigerian coastal waters by pirates have increased massively and the attendant the economic impact is a higher cost of carrying goods due to enormous charges often demanded by the criminals.

“What the kidnappers do to humans in requesting for ransom is what pirates do to seafarers holding the entire ship to ransom until their request is met,” he said.

Alu said that piracy is however not just a Nigerian thing but spreads across all the transatlantic voyage route that most goods go through before landing in Nigeria.

He also pointed at poor maintenance of conveying vessels leading to the sinking of cargo-carrying vessels, noting that the single plate underneath of vessels makes seepage easy thereby causing damage to cargo and resulting in insurance claims.