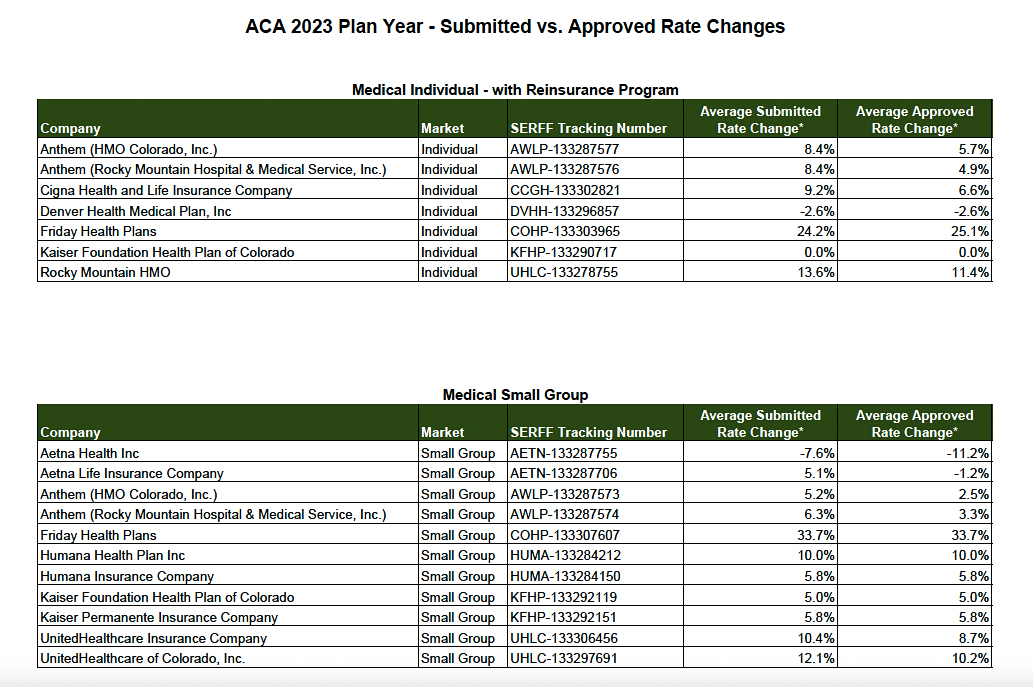 Prices for people who buy health insurance on their own are set to increase next year in Colorado — but not quite by as much as initially proposed.

When insurers first filed rates with the state this summer, they requested an 11% increase in premium prices in the individual market, which is the category of the health insurance market that covers people who buy insurance without help from an employer. In finalized rates released Tuesday, that increase had dropped to 10.4%.

In the small group market, where small companies buy insurance for their employees, premium prices are set to increase by an average of 7.4%. Insurers had originally requested a 9.2% increase.

Regulators at the state’s Division of Insurance must approve premium rates each year for the two markets, after examining whether the proposed prices are reasonably supported by the market circumstances. Most of the time, that results in the final rates being lower than those initially proposed, though sometimes it goes in the other direction if the division finds that the proposed rates are not sustainable.

“The rate review team worked their magic like they do every year,” Michael Conway, Colorado’s insurance commissioner, said in talking about the lower-than-initially-proposed increases in the final rates.

Limiting increases by slimming down profits

One way regulators reduced the proposed increases is by targeting insurers’ profit margins. When companies file their proposed rates they have to include a breakdown of how they arrived at their figures — how much of the premium goes to paying for prescription drugs, how much for hospital care, how much for administrative costs, how much for profits, and so on.

Conway said regulators this year limited insurers to a 2% profit margin, which for some insurers brought down their overall increase.

“They worked on the profit margin in particular and got the health insurers to agree to reduce their profits,” Conway said, referring to his rate-review team.

How much insurers are increasing their prices varies pretty widely. Kaiser Permanente, for instance, did not request a rate increase in the individual market, and Denver Health Medical Plans is set to drop its rates by 2.6%. But Friday, Health Plans will increase its rates by an average of 25.1%, which is actually more than the 24.2% increase initially proposed for the individual market. Cigna, Anthem and Rocky Mountain Health Plans all have increases that are lower than what they proposed.

Why some people could end up paying less

For people in the individual market, though, these rates are not necessarily what they will pay for coverage. People who shop on the state’s health insurance exchange, Connect for Health Colorado, and who qualify for premium subsidies could end up paying a lot less.

The reason has to do with how the subsidies are calculated, Conway said. When premium rates go up, the value of the subsidies also goes up, meaning consumers have more power to effectively buy their premium rates down. On top of that, Congress extended the enhanced subsidies first made available in the pandemic-era American Rescue Plan Act. That means a lot more people will be eligible for subsidies.

Conway said roughly 80% of the people who shop for individual health insurance on the state’s exchange are eligible for subsidies. And, for subsidy-eligible people in some parts of Colorado, the portion of their premiums that they pay is set to drop. Conway said that people in Summit County who receive subsidies and who auto-renew their existing plans could see what they pay for insurance premiums drop by up to 38%. That’s despite the underlying premiums in Summit County rising by an average of 8%.

As with previous years, Conway and other state officials say that consumers who are just shopping on price will likely be able to find less expensive options than what they currently have.

Did the Colorado Option succeed? It’s a muddle.

To Conway, the answer is yes. In a news release, the Division of Insurance said consumers will be able “to collectively save $14.7 million by shopping and choosing the lowest cost Colorado Option plan in their preferred metal tier (bronze, silver or gold).”

“The Colorado Option, which is being offered for the first time, allows participants to better understand what they are paying for and prioritizes mental and physical well being intended to better support total wellness,” Lt. Gov. Dianne Primavera said in a statement.

But, to insurers, the Colorado Option failed to live up to its promises. Amanda Massey, the executive director of the Colorado Association of Health Plans, a trade group, said most of the lowest-cost plans across Colorado next year will not be Colorado Option plans. While insurers were told to price Colorado Option plans lower, they were also required to make the rates actuarially sound, meaning they had to be sustainable based on the level of services that plans provide.

“There were a number of decisions made that were part of the development of the Colorado Option that would fundamentally make hitting the targets almost impossible,” she said.

The organization Colorado’s Health Care Future said in a news release that non-Colorado Option plans in many counties will have premiums that are 5% to 10% below the Colorado Option’s prices in those counties. The organization is a project of the Partnership for America’s Health Care Future Action, which is itself an alliance of national insurance, hospital and pharmaceutical lobbying groups.

“They’re almost competing with themselves,” he said. “They’re trying to reduce their premiums to account for the fact that the Colorado Option is bringing premiums down.”

Massey disagreed with that idea. She noted a number of other legislative mandates passed in recent years — things like insulin price caps and rules requiring increased spending on primary care — that her association’s members estimate have increased insurance premiums by more than 5%.

She also pointed to the withdrawal of a couple of insurance companies from the Colorado market — both Oscar Health and Bright Health decided not to offer plans in the state for 2023. Both withdrawals were part of national pullbacks by the companies, but Massey said their decisions are hard to square with a picture of the Colorado insurance market as a place where carriers can thrive.

“I don’t know that we would say that the market has gotten more competitive,” she said.

“Insurers and hospitals are not making enough of an effort to meet the required reductions for some Colorado Option plans, but are instead setting a baseline for failing to hit the targets without reasonable justification,” Singh said.