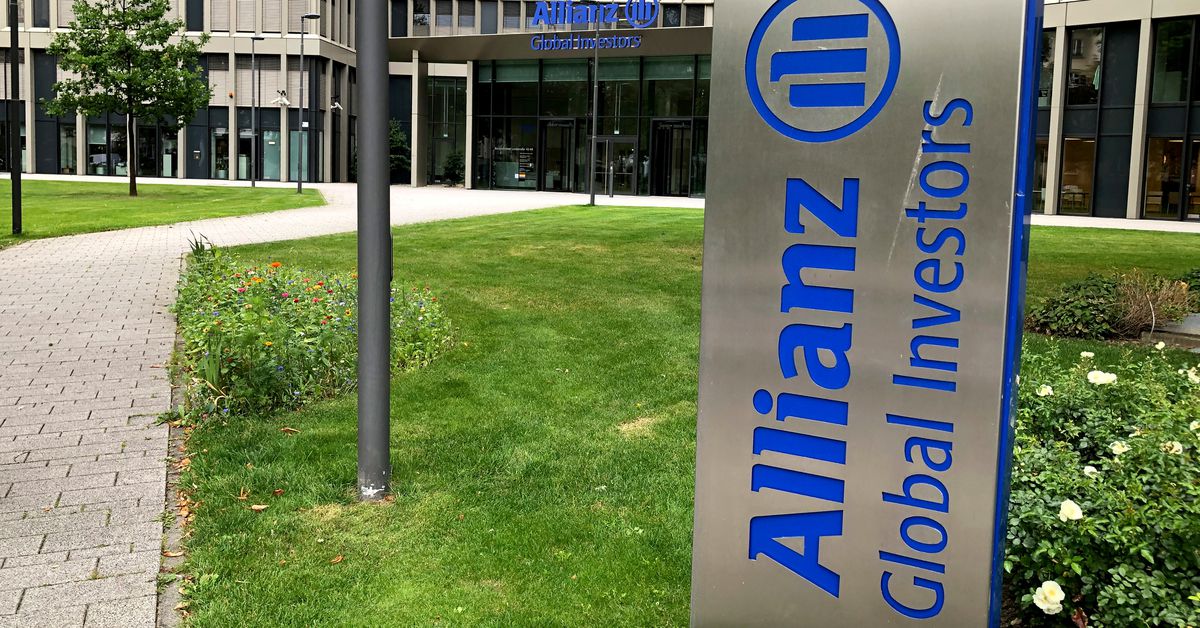 FRANKFURT/WASHINGTON, Sept 10 (Reuters) – The U.S. Department of Justice (DOJ) investigation into German insurer Allianz (ALVG.DE) is looking at possible misconduct by fund managers and misrepresentation of risk to investors, three people with knowledge of the matter told Reuters.

The probe, disclosed by the company on Aug. 1, is focused on Allianz funds that used complex options strategies to generate returns but racked up massive losses when the spread of COVID-19 triggered wild stock market swings in February and March 2020.

The DOJ is looking into whether managers at Allianz Global Investor’s Structured Alpha Funds abandoned a strategy to provide protection against market crashes and how they communicated the amount of risk to investors, the sources said.

The DOJ and Allianz declined to comment on the nature of the investigation, which could lead to criminal charges.

The U.S. Security and Exchange Commission (SEC) launched a probe into the demise of the funds last year, Allianz disclosed after the Arkansas Teacher Retirement System filed a lawsuit in July 2020 seeking $774 million in damages.

Since then, at least 25 investor lawsuits, predominantly by U.S. public pension funds, including those for New York subway workers and city of Milwaukee employees, have been filed against Allianz for a total of about $6 billion in damages.

The company is seeking to have the lawsuits dismissed arguing that it is not liable for the investors’ losses.

The DOJ launched its probe after a referral from the SEC while German financial regulator BaFin has also been looking into the demise of the Structured Alpha Funds, Reuters reported this week.

In addition to its insurance business, the German company is one of the world’s biggest money managers with 2.4 trillion euros ($2.9 trillion) in assets under management through fixed-income investment giant PIMCO and Allianz Global Investors.

Allianz said in August it had reassessed the risks relating to the funds in light of the DOJ investigation and concluded the matter could have a material impact on its future results.

Berenberg, which rates Allianz a “buy”, has estimated the worst-case hit for the insurer could be 6.8 billion euros ($8 billion) – equivalent to its net profit last year – if it loses all the lawsuits and is fined by U.S. authorities.

“It’s a massive setback for Allianz,” Ingo Speich, head of sustainability and corporate governance at Deka, a top Allianz investor, told Reuters. “It begs the question to what extent Allianz as an insurer should get involved in asset management and the offering of complicated products.”

In a motion to dismiss filed in February 2021, Allianz’s lawyers argue that the institutions were highly sophisticated investors and had been warned the strategies were speculative.

Yet the investors argue in their lawsuits that the collapse of the Structured Alpha Funds was the result of Allianz deviating from its stated strategy of providing protection against market falls with put options.

In a February 2020 presentation shown in one investor lawsuit, Allianz Global Investors marketed the $15 billion family of Alpha funds stating: “Today we are as prepared as ever in the event of a severe market dislocation.”

By the end of March that year, two funds worth a combined $2.3 billion at the end of 2019 had been liquidated after losing much of their value and investors such as Arkansas Teachers began getting out of the other Alpha funds nursing heavy losses.

Investor lawsuits argue that Allianz Global Investors had said it would always buy more put options to protect against market falls than the amount of put options it sold to earn premium income, but did not maintain that approach.

“The key wrongdoing here that we allege is the abandonment of the trading strategy. They said they were going to do this strategy; they didn’t do it,” one plaintiff’s lawyer told a New York judge at a pre-trial meeting, according to a transcript.

In its motion to dismiss, Allianz said the funds had broad discretion to change investment strategies without prior consent or notice.

However, one of the funds, the Global Equity 500, lost 78% in the first quarter of 2020 while the benchmark it was measured against fell 22%, according to the Arkansas lawsuit.

The Arkansas lawsuit also cites options positions data for the U.S. Equity 250 fund on Feb. 29, 2020 showing it would be exposed to losses in the event of fall in the S&P 500 Index (.SPX) and an increase in the VIX volatility index (.VIX).

Just a few weeks later, the S&P had slumped by a quarter since the end of February and the VIX had more than doubled.

Arkansas, which had $1.6 billion in three Alpha funds at the end of 2019, opted to shift what was left of its investments to rival asset manager BlackRock (BLK.N) in April 2020, minutes of an Arkansas retirement plan board meeting show.

Allianz has declined to reveal what is left in the Alpha funds that were not liquidated.

Reiner Kloecker, a fund manager with Union Investment, another of Allianz’s largest shareholders, said the DOJ investigation, “reinforces the suspicion of blatant internal misconduct or a lack of control processes”.

Speaking on Aug. 6, a few days after Allianz announced the DOJ investigation, Chief Executive Officer Oliver Baete said it had been a horrible week for him and the insurer.

Baete said that the events had nothing to do with Allianz Group’s capabilities, culture or ethics. “Not everything went perfectly with the fund management,” he told reporters.

Meanwhile, the fallout in Arkansas continues.

A committee of the state’s legislature that oversees public retirement added the losses to the agenda of a September meeting, Senator Kim Hammer, who co-chairs the committee, said.

He told Reuters the committee would look at the investment policies of the Arkansas fund and whether Allianz was, “a company we should have been involved with in the first place”.

Additional reporting by Alexander Huebner in Munich, Lawrence Delevingne in Boston and Carolyn Cohn in London; Editing by David Clarke