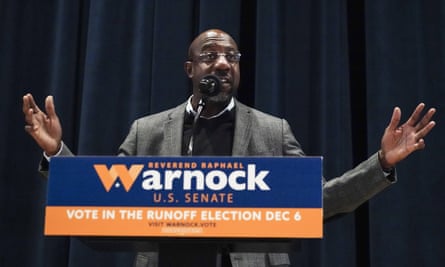 Donald Trump failed to disclose a $19.8m loan from a company with historical ties to North Korea while he was the US president, according to a report.

Documents obtained by the New York attorney general, and reported by Forbes, indicate a previously unreported loan owed by Trump to Daewoo, a South Korean conglomerate and the only South Korean company allowed to operate a business in North Korea during the mid-1990s.

Forbes revealed that Trump’s relationship with Daewoo was at least 25 years old. At one point, Daewoo partnered with Trump on a development project near the UN headquarters in New York City, Trump World Tower.

Trump and Daewoo continued to do business together, including using Trump’s name on six South Korea-based properties from 1999 to 2007, according to the magazine.

The winner of today’s midterm election runoff for one of Georgia’s two seats in the US Senate will make history.

Raphael Warnock became the first Black senator from Georgia when he won the 2020 presidential election runoff that helped tip the upper chamber into Democratic control, boosting the party in its capture of the House, the Senate and the White House.

Standing in the way is Republican challenger Herschel Walker. Whoever wins will be the first Black person elected from Georgia to a full Senate term.

Black voters there say the choice is stark: Warnock, the senior minister of Martin Luther King’s Atlanta church, echoes traditional liberal notions of the Black experience; and Walker, a University of Georgia football icon, speaks the language of white cultural conservatism and mocks Warnock’s interpretations of King, among other matters.

Iranian shopkeepers and lorry drivers staged a strike in nearly 40 cities and towns yesterday after calls for a three-day nationwide general strike from protesters, as the government declined to confirm a claim by a senior official that the morality police had been abolished.

Iranian newspapers instead reported an increase in patrols, especially in religious cities, requiring women to wear the hijab, and shop managers being directed by the police to reinforce hijab restrictions. The confusion may be partly due to mixed messages being sent out by a divided regime as it seeks to quell the protests.

Iran has been rocked by 11 weeks of unrest since a 22-year-old Kurdish woman, Mahsa Amini, died in police custody after being arrested by the morality police.

Beijing has dropped the need for people to show negative Covid tests to enter supermarkets and offices, the latest in an easing of curbs across China after historic protests.

“Beijing readies itself for life again,” read a headline in the government-owned China Daily newspaper, adding that people were “gradually embracing” the slow return to normality.

Further loosening beckons after a string of demonstrations marked the biggest show of public discontent in mainland China since Xi Jinping became president in 2012.

Top officials have softened their tone on the severity of the virus, bringing China closer to what other countries have been saying for more than a year as they dropped restrictions and opted to live with Covid-19.

The idea of Brazilian football is sometimes better than the reality. They often don’t play with any more flair than other teams and sometimes they are plain bad (look no further than their 7-1 humiliation at the hands of Germany at the 2014 World Cup). But in their 4-1 thrashing of South Korea on Monday they were very good indeed. As the Guardian’s Jonathan Liew put it, they played “special-effects football, computer-game football, football so filthily good you needed a cigarette and a shower after watching it”.

Brazil will play Croatia in the quarter-finals. The Croats had to rely on a penalty shootout to beat Japan in Monday’s early game but they are exactly the kind of assured, experienced and technically gifted team that could wear a juggernaut like Brazil down.

Elsewhere at the World Cup:

Don’t miss this: Six months after Dom Phillips and Bruno Pereira were murdered, the Amazon remains unsafe for activists

The risk of being murdered for challenging the environmental outlaws plundering the rivers and rainforests of the Javari Valley remains all too real, writes Tom Phillips. The disappearance of Phillips and Pereira caused international outrage and exposed the environmental catastrophe unfolding under former president Jair Bolsonaro’s forest-wrecking administration.

Climate check: young naturalists on the world beyond Cop15

More than 300 young people from around the world are gathering in Montreal for a two-day youth summit before the Cop15 UN biodiversity conference. Here, three young naturalists in the UK tell the Guardian about their favourite wildlife experiences, as well as their hopes – and concerns – for Cop15 and beyond.

“I’m a member of the London Rewilding Taskforce, which supports nature recovery in the capital through rewilding,” says Kabir Kaul, an A-level student. “Many amazing projects are already happening, including the reintroduction of beavers in Enfield, and water voles in Kingston. I want to get people from all walks of life involved in protecting the urban nature around them.”

Diet-related chronic disease is the perennial number one killer in the US, responsible for more deaths than Covid-19 even at the pandemic’s peak, writes Mark Bittman. “For a healthy population, we must mandate or at least incentivize growing real food for nutrition, not cheap meat and corn and soya beans for junk food.”

The academic and author says that government mandates around public health can be beneficial, such as laws or regulations around seatbelts, tobacco, lightbulbs, recycling and public education, which have all improved public welfare. “Yet no such efforts have been made in diet, where the mantra of ‘behavior change’ stands in for good policy.”

First Thing is delivered to thousands of inboxes every weekday. If you’re not already signed up, subscribe now.