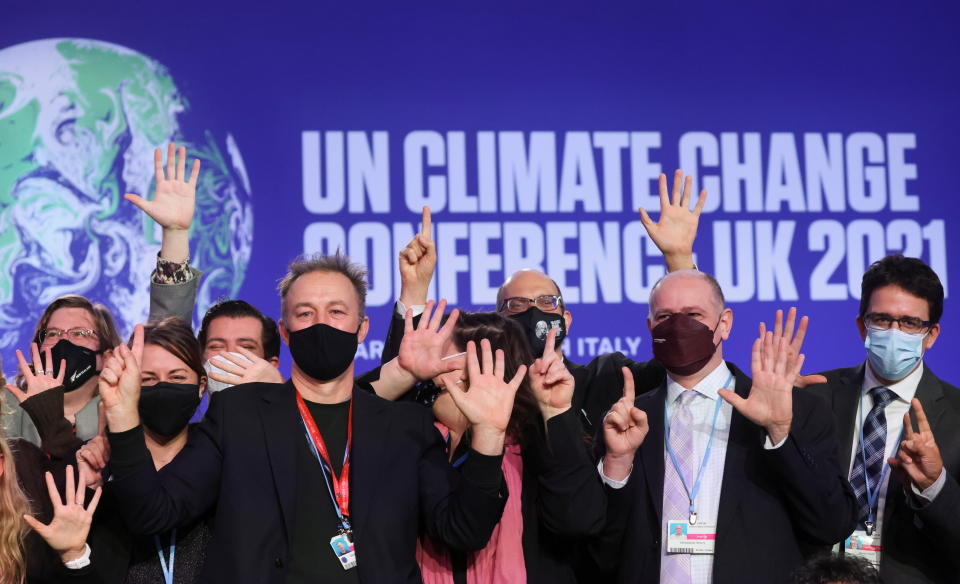 Global leaders and business executives gathered in Glasgow last year, declaring the annual UN Climate Change Conference COP 26 the “last and best chance” to avert a climate catastrophe. More than 450 corporations vowed to mobilize billions of dollars in climate financing alongside the world’s largest economies, to accelerate the transition to net-zero emissions.

One year on, climate ambitions at Egypt’s Sharm el-Sheikh are expected to be much more subdued as COP 27 kicks off its two-week-long event. This is primarily due to a prolonged war in Europe and fears about a global economic downturn testing the resolve of the world’s largest greenhouse gas emitters and their commitment to climate action.

Since the summit in Scotland last November, just 24 of the 193 countries that agreed to ramp up their climate actions have followed through on their plans, according to the UN. Meanwhile, the financial companies that signed onto the Glasgow Financial Alliance for Net Zero, vowing to cut emissions and pressure companies that rely on their financing to follow, have been slow to implement their ambitions.

A recent study by Accenture found that just 34% of the world’s top 2,000 publicly traded companies had publicly stated net zero targets, while a mere 7% are on track to achieve their own targets for scope 1 and 2 or direct emissions.

“We’ve had a lot of shocks thrown on top which does impact business priorities,” said Claus Aagaard, Chief Financial Officer of Mars, a leading advocate of sustainability, during a conversation earlier this fall.

“At some level, it’s easy enough to stay on the course of climate, if you make it integral to the way you think about the sustainability of your business and the planet, and if you put it in the context that at least 80 percent of consumers are telling us – that it’s important to them.”

Those priorities around climate action have been upended by the disruption caused by the war between Ukraine and Russia. The fighting that began in late February prompted major economies, particularly in Europe, to turn to fossil fuels to supplement shortfalls in Russian gas. Global coal power generation is on track to set a record for a second straight year, according to Bloomberg, despite a vow by world leaders to “phase down” coal in Scotland.

In the US, President Biden’s ambitions to accelerate the transition to clean energy, in part through the Inflation Reduction Act, have been complicated by high gas prices and sagging poll numbers, as he publicly calls on oil companies to increase production and refining. Federal energy data shows the US has produced more crude oil since Biden took office than during the same period under former President Donald Trump, according to Politico.

The macroeconomic fallout from the pandemic and soaring costs brought on by supply chain disruptions and energy costs have complicated the task of decarbonization for corporations. The Accenture study found that 93% of G2000 companies that set net-zero targets are unlikely to reach them in the timeline they set out to, while a separate report by Bain and Company found that mounting global inflation has muddled the outlook for corporations to act on climate.

“At a time when they are plotting their downturn strategy, many corporations that set ambitious decarbonization targets are wrestling with what they can now afford to do to accelerate decarbonization and monetize it with customers,” the report said.

The agenda at COP27 is largely expected to focus on four key areas: mitigation, loss and damage, adaptation, and finance. Leaders from developing countries that have been hardest hit by climate change are expected to push for reparations, paid for by the world’s richest countries, to shoulder the cost of “loss and damage” caused by extreme weather events.

In the last year alone, 37 million people have faced hunger and starvation in the greater Horn of Africa following record drought, while a third of Pakistan submerged under water following record rainfall.

The largest greenhouse gas emitters, including the US, have long resisted the idea of a reparations fund.

”This is a fundamental question of climate justice, international solidarity, and trust,” said Amina Mohammed, UN Deputy Secretary General, in a statement ahead of COP27. “Those who have contributed the least to the crisis are being hit the hardest. According to the Intergovernmental Panel on Climate Change, if you are living in one of the hotspots for the climate crisis in the global south you are 15 times more likely to die from a climate disaster.”

‘No time for delay’

New data shows the window to avert the worst of the climate crisis is closing quickly. The latest report by the UN’s Intergovernmental Panel on Climate Change (IPCC) found that emissions “unequivocally caused by human activities” have warmed global temperatures by 1.1°C already.

Temperatures will increase until the middle of the century under all emissions scenarios considered, with warming expected to exceed 1.5°C to 2°C, increasing the intensity and frequency of extreme weather.

Only drastic emissions cuts in the next few decades is likely to prevent warming from spiraling out of control, according to the UN.

“The science is unequivocal, the changes are unprecedented, and there is no more time for delay,” the report said.