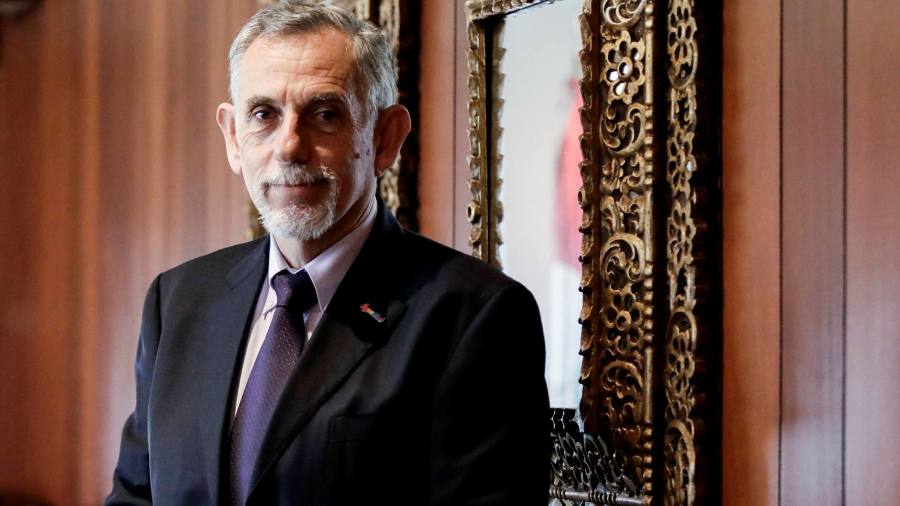 Sign up to myFT Daily Digest to be the first to know about Peru news.

Pedro Francke has been called many things in recent weeks: a moderate in a radical leftwing government, a Marxist who will wreck Peru’s standout free-market economy and a turncoat for accepting the finance minister job in President Pedro Castillo’s administration after initially refusing.

“I’m a leftist who believes that reducing inequality is absolutely fundamental and perfectly compatible with reasonable macroeconomic management,” he told the Financial Times. “The two things can go hand in hand.”

Ever since Castillo won June’s presidential election Francke, 60, has been centre stage in Peru. The former World Bank economist was widely tipped to get the finance minister’s job and, now that he has secured it, he is confronting formidable challenges on every side.

While Peru’s economy has been one of Latin America’s success stories in the 21st century, recent political instability has taken the shine off. The country has also been hit hard by coronavirus: it has the highest per capita death rate in the world, and gross domestic product fell 11.1 per cent last year.

Castillo’s election on a hard-left ticket rattled financial markets and sent capital fleeing, pushing Peru’s currency, the sol, to record lows against the dollar. The day after a hardline leftist, Guido Bellido, was named prime minister it registered its biggest one-day drop in seven years. It has since stabilised but not rebounded.

This is a government of change and I understand that generates a certain lack of confidence, turbulence and misunderstanding

The Castillo government has set up a “special commission” to reverse that trend, and Francke said he expected the sol to recover. “I think we’re going to see greater calm on the markets,” he said. “If I had to make a recommendation to investors, I’d tell them they shouldn’t sell sols to buy dollars. It seems to me they [dollars] are a bit expensive.”

Francke has been trying to persuade the well-respected head of the central bank, Julio Velarde, to stay on. On Tuesday, media reported that Velarde had accepted, a move that if confirmed would reassure the private sector.

The minister reiterated his commitment to central bank autonomy, saying he did not envisage significant changes to the relationship between the bank and government. “If it’s not broken don’t fix it,” Francke said. “We have enough problems in Peru to start fixing things that are working well.”

The minister’s other near-term goal is to draw up a macroeconomic plan to be unveiled on August 20. Francke expects the economy to rebound by 10 per cent this year and 4.8 per cent in 2022.

He confirmed Peru would soon reactivate its fiscal rule — suspended last year because of the pandemic — which calls on the government to reduce the fiscal deficit over time to 1 per cent of GDP. It stood at 1.6 per cent before coronavirus but jumped to 8.9 per cent last year. The minister declined to say what the new timeframe for implementation would be.

Before his appointment, Francke was active on social media and some of his comments have been used against him as proof of his supposed radicalism. In one YouTube video, he says Peruvians should have more rights than foreign investors in Peru.

“How can it be that a Chilean, a Chinese or an American comes to Peru and has the same rights as a Peruvian on economic issues?” he asks. “This doesn’t exist anywhere in the world.”

In other videos he advocates a new constitution, hits out at mining companies and says the state should have the right to modify contracts with private firms.

Asked about the comments, Francke said they reflected his personal opinions but “I am now in another role”.

“I’m answering as the minister of economy and finances in August 2021,” he said. He also acknowledged the new government could “only work within the political space we have” — a tacit acceptance it might be thwarted by congress, where Castillo’s party has only 37 out of 130 seats.

At the heart of Castillo’s programme is a pledge to replace Peru’s 1993 constitution, which makes it relatively easy both for congress to impeach the president and for the president to dissolve congress. His supporters blame it for Peru’s political instability, which has given the country five presidents in five years.

Francke said that in strictly economic terms, a new constitution was unnecessary and not a priority for the ministry. “If you look at the economic measures that President Castillo unveiled in his inauguration speech, none of them require a constitutional change,” he said.

However, he said a new charter would improve governability and that could only benefit the economy.

“It’s very negative that just one week into the new government, people are talking about impeaching the president or shutting down congress,” he said. “These are problems that come from the constitution.”

Asked what his message for foreign investors was, Francke said: “This is a government of change and I understand that generates a certain lack of confidence, turbulence and misunderstanding.”

“But we absolutely respect private property and we’re absolutely opposed to any proposal for exchange rate controls and price controls. We have a clear policy of fiscal responsibility.”