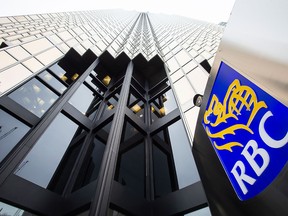 The Royal Bank of Canada hiked its dividend after reporting a profit of $3.88 billion in its fourth quarter Wednesday, but said it would pause share buybacks until its blockbuster deal to acquire HSBC Canada’s operations for $13.5 billion closes.

The bank’s adjusted earnings were $3.81 billion or $2.78 per share for the three months ending Oct. 31, beating average analyst expectations of $2.69 per share. RBC said the earnings were relatively flat compared to the same quarter a year ago. Net income for the full fiscal year slipped two per cent from last year to $15.8 billion as volatile markets hit the bank’s capital markets segment.

Thanks for signing up!

A welcome email is on its way. If you don’t see it, please check your junk folder.

The next issue of FP Finance will soon be in your inbox.

We encountered an issue signing you up. Please try again

RBC also declared a four-cent increase to its dividend to $1.32 per share payable on Feb. 24.

McKay added that results were also dragged down by higher provisions for credit losses.

Those provisions checked in at $381 million for the fourth quarter, compared to a release of $227 million in the same quarter last year.

Personal and commercial banking profits grew by five per cent year-over-year to $2.14 billion, bolstered by higher interest rates and a 10 per cent boost in mortgage and business loan growth.

Higher net interest income also boosted RBC’s wealth management by 47 per cent compared to a year ago to $822 million.

However, income in the bank’s capital markets segment slipped 33 per cent to $617 million, which RBC largely attributed to the timing of its compensation plans.

On Tuesday, the lender agreed to buy British bank HSBC’s Canadian business for $13.5 billion, looking to expand its footprint in the domestic retail market. McKay reiterated the benefits RBC stands to gain from the deal.

“Yesterday, we announced the acquisition of HSBC Canada with an implied consideration of approximately $12.5 billion net of a locked-box agreement, or less than nine times fully synergized 2024 earnings,” McKay said. “And given expense synergies and potential revenue opportunities, this transaction is financially compelling.”

During the conference call, RBC chief financial officer Nadine Ahn said the bank would defer further share repurchases until the anticipated deal close late next year. Last December, the bank declared its intentions to repurchase up to 45 million of common shares over the course of the year. So far, filings show the bank has repurchased about 41 million shares for roughly $5.43 billion. The share buyback phase will continue until Dec. 7.

“While some of the beat was generated off of lower-than-expected provisions, we note that (RBC)’s underlying performance was strong, particularly in its domestic retail and wealth management operations,” Aiken wrote in his Nov. 30 note. “With very few complaints, we would expect the results to be well received.”

Shares of RBC traded flat on Wednesday following its results, closing the day out at $133.78 in Toronto.