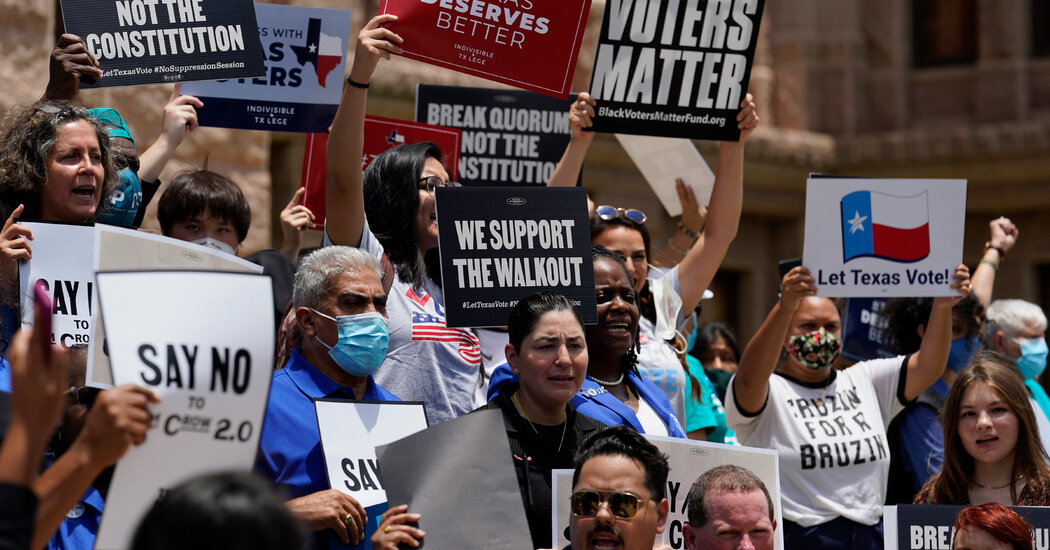 The Republican-controlled Texas Legislature this week passed a major bill overhauling election laws in the state, the latest of many to tighten voting rules this year. In Texas, as elsewhere, many businesses and industry groups have spoken out against the move, arguing that it is bad for the economy.

Texas has persuaded many companies to relocate or expand operations there with its business-friendly policies. But in taking a stand on voting rights, some companies have invited scrutiny of their words and actions, especially with political donations. Balancing this against the tightening of some of the country’s strictest voting rules will test companies’ social pledges with financial imperatives.

There is also the risk of political blowback for speaking out in a state with a Republican governor and a Republican senator embracing restrictive voting rules as a platform for potential presidential runs in 2024.

“It is about ensuring that all Texans trust the outcome of every election in Texas,” Lt. Gov. Dan Patrick, a Republican who presides over the Texas Senate, said in a statement.

In the day or so after the voting bill passed, the first reaction of Texas-based businesses that spoke out on ballot access appeared to pivot to Washington, putting pressure on Congress to pass federal voting protections.

“We hoped for a different outcome,” an American Airlines spokeswoman told the DealBook newsletter. The airline, based in Fort Worth, had sought legislation “making it easier to vote, not harder,” issuing a statement in April opposing the law. In May, the airline joined Fair Elections Texas, a nonpartisan coalition of about two dozen businesses — including Microsoft, Unilever and Levi Strauss — that called on lawmakers to expand ballot access.

A spokeswoman for Dell, which is based in Round Rock, said it would encourage employees to vote and urge political leaders to “focus on staying committed to a healthy and welcoming business climate for all Texans.” Microsoft, Patagonia and Levi Strauss also said they were disappointed with the Texas bill’s passage and called for Congress to pass voting rights legislation.

“Texans love Texas,” but they want Washington’s help, said Nathan Ryan, an Austin city commissioner and the chief executive of the consulting firm Blue Sky Partners, part of the Fair Elections Texas group. He and others are strategizing, he said, and will approach the Biden administration and congressional leaders to press for passage of two federal voting rights laws: the John Lewis Voting Rights Advancement Act and the For the People Act. (Both passed the House but have stalled in the Senate amid a Republican filibuster.)

There is “an immediate need for a national minimum standard for voter protection,” said David Clunie of the Black Economic Alliance, an organization behind a letter in April with hundreds of signatories condemning laws restricting ballot access.

New “categories of attack” are being created, like introducing criminal penalties for election administrators, said Sarah Walker of the nonpartisan group Secure Democracy, which businesses and industry groups turn to for help understanding these bills.

“The clock is ticking. The U.S. Senate must act,” said Rafael Anchia, a Texas House member and a Democrat. The Texas bill will be put in place in about 90 days, he noted, calling on “those in the seat of democracy to pass a national voting rights bill.”